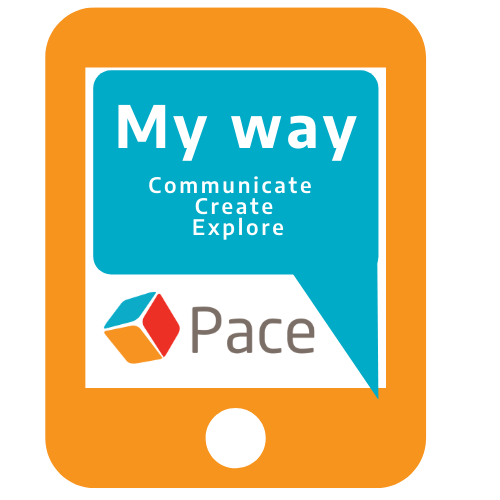 My Way is a newly developed application by Pace, designed to support a child’s communication, expressions, and individuality. My Way is a playful, fun and creative platform that empowers users to participate in their daily childhood antics! Users can tell jokes or stories, make sounds and funny noises – all in their own way.\n \n\nNo matter the access method: switch (including multiple switches), keyboard or touchscreen, no matter their accent, phrase or word, My way helps children with SEND express themselves.\n\nFor many communication devices/ Voice Output Communication Aids (VOCA) “speakers voice” is either too robotic or doesn’t reflect the child’s age, gender, heritage or personality. With My Way, the user can have friends, family or carers record sayings and sounds as the user would want. Allowing the user individualised expression.\n\nAn Indian teenager can have his male cousin of a similar age record his request for his favourite song. A Chinese girl can have her sister record the words to her favourite song, so that she can sing along. Personal, individual, and easy to use.\n\nThe following ways of sequencing playback are supported:\n\n* Sequence: record a series of messages, which are then played in order from first to last. For example, you can record the segments of a story and have the user progress through them on step at a time.\n* Random: recordings are played in a random order. For example, you can make make audio dice.\n* Shuffle: recordings are shuffled. For example, you can decide the order in which students complete an activity in a classroom setting.\n* Scan and prompt: two switches are assigned roles of ‘scan’ (progress through a sequence of recordings, playing them at low volume) and ‘prompt’ (play the last recording played via ‘scan’ at full volume). For example, you can record a series of personalized greetings, pick the one to use with the scan switch, then play it at full volume using the prompt switch.\n* Converse: two switches are assigned roles of ‘converse A’ and ‘converse B’. Recordings are played in sequence alternating A, B, A, B, … (they take it in turns, so, if the same button is pressed twice in a row, nothing is played the second time)

License: MIT
Authors: PaceChildrensCharity
Is something wrong with this entry? Get in touch with us
TAGGED IN
alternative-and-augmentative-communication switches